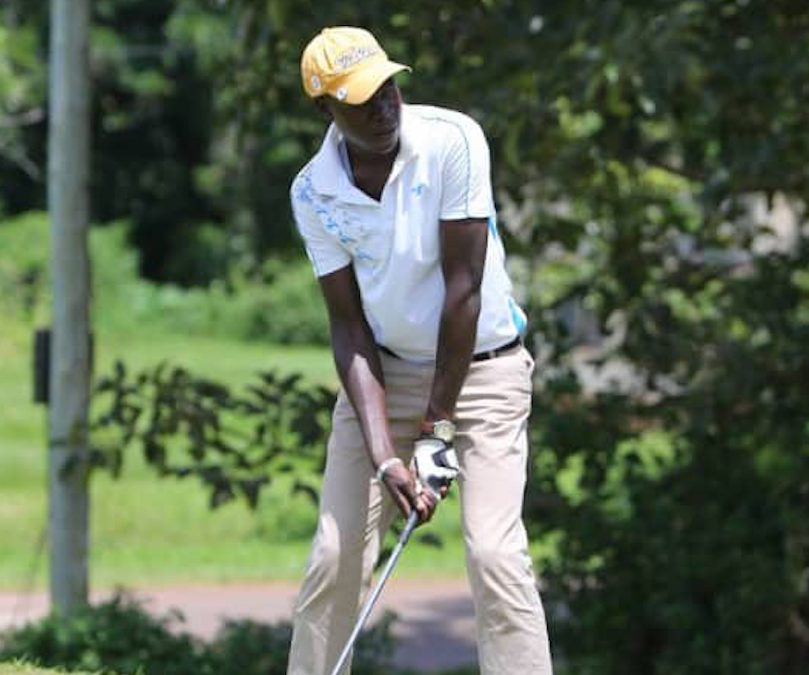 Note from Sam: this is a golfer from Uganda that I have been working with. Proud of his accomplishments.

Amateur golfer Colin Ajidra is a true believer of late Rap star Tupac Amara Shakur and his fondness to his lyrics together with his music has inspired him to reach where he is at the moment.

The 23 year old handicap 2 player likes listening to his music and has a whole collection of his CDs and videos.

“I always listen to his lyrics before playing in any game and the song that depicts me and what I have gone through is Dear Mamma,” Ajidra said in a candid interview at the Uganda Golf Club where he is a member.

“I have 2 of his albums me against the world and all eyes on me those are like 20 songs. I also like this song which was very real to me The Ghetto gospel,” Ajidra said. “That how I used that album to say I am gonna work hard for all to see me standing from the hood.”

Ajidra grew up with his father John Bosco Ajidra, who worked in the Airforce and passed on in 2005 together with his mother Alice Wikoru, a house wife in Entebbe Army Barracks.

Life for the very down to earth golfer was never easy in such conditions after his father passed on however his mother was very supportive of him when he started his journey of golf as a caddy at the age of 12.

“I remember I started caddying at Entebbe club at the age of 12 by then caddy fees where 4,000 shillings and I used to save whatever I earned on the course by then,” the national team golfer said. “I used to caddy mostly on the weekends while during the holidays I used to caddy from Monday to Friday.”

“Members of the Kabalaza at Entebbe Club contributed for my first year fees at MUBS while my boss who I caddied for Dr Sam Sejjaka, paid for my second year after which I graduated,” Ajidra added. “Currently I work for n my“Father figure” Charles Odere, who is one of my sponsors and calls me one of his “sons”.”

Ajidra’s journey has seen him receive a wild card invitation to the national golf team from the year’s 2016, 2017 and 2018 where he has featured at the Muthaiga Open with other national players like Edrine Okong, Joel Basalaine, Becca Mwanja and Ronald Rugumayo.

He has also played on the South Africa Big Easy Sunshine tour after being sponsored and invited by AJ Coetzee playing at the Mount Fein Golf Course, Pretoria, and Waterkloof in Pretoria and Lake City Golf Club in Johannesburg and Pretoria Country Club.

His rise on the golf scene has seen him improve his game after receiving a readymade kit from him that was bought for him by his South African sponsor and director AJ Coetzee.

“I 2015 I met Titus Okwong who got me a college and golf scholarship to study in the same college he is in that is the Livingstone College in North Carolina,” Ajidra said. “I will be pursuing a degree in Finance and banking at the university at the same will be playing golf for the college as a freshman”