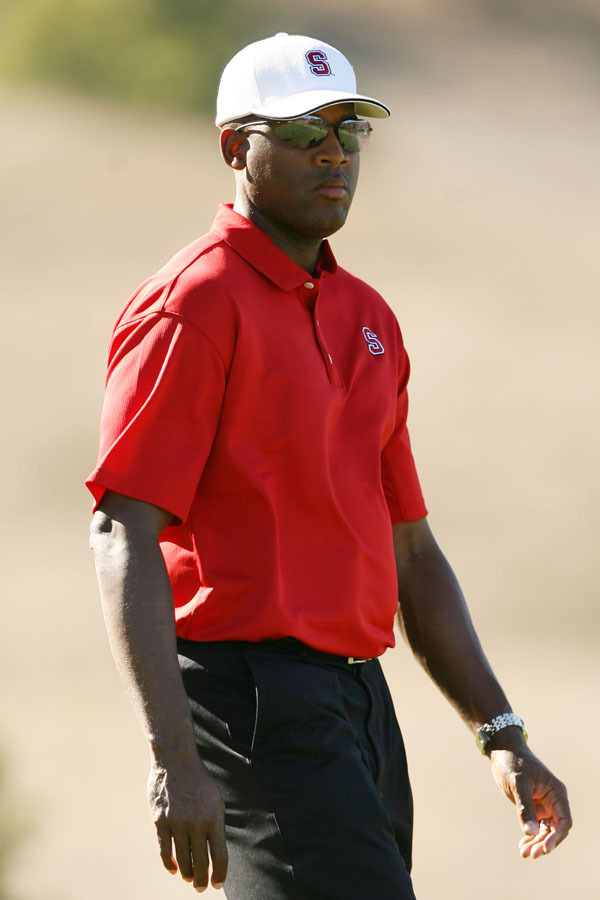 Pictured above: Sam during his days as assistant coach at Stanford University. 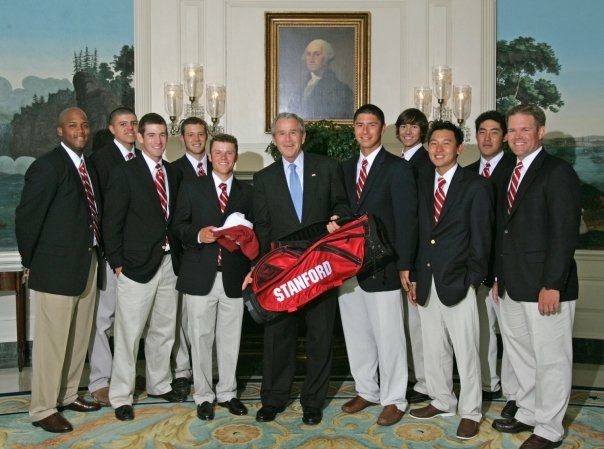 Pictured above: Stanford men’s golf team visits the White House after their National Championship victory in 2007. What a pleasure it was to meet George W. Bush. 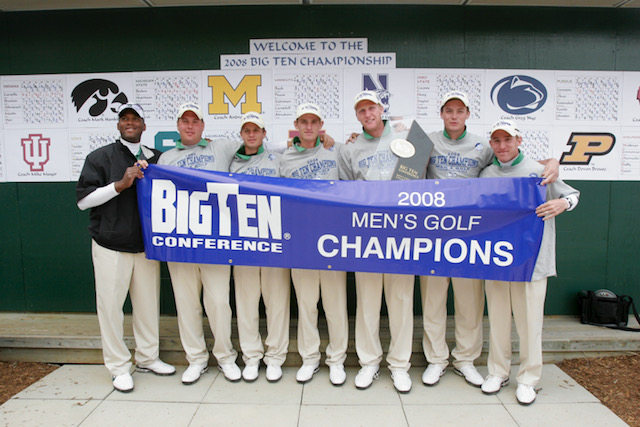 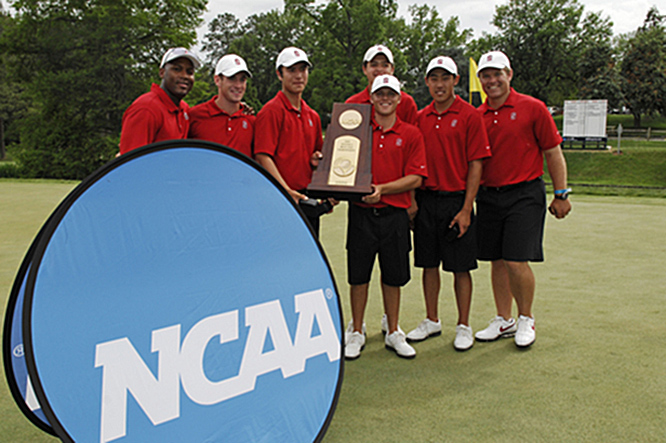 Pictured above: Sam’s team at Stanford University won the NCAA Championship in 2007. 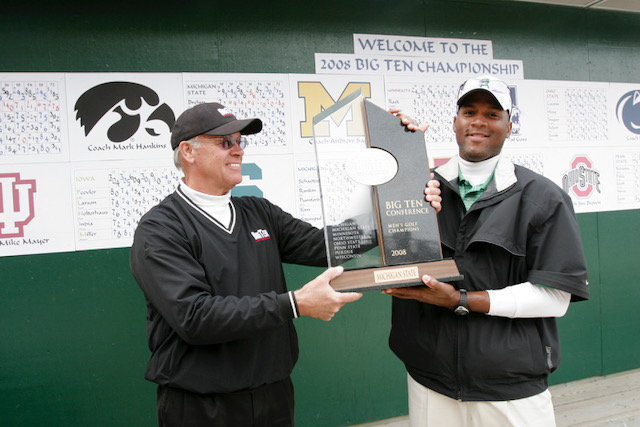 Pictured above: In 2008, Sam was voted Big Ten Coach of the Year while directing MSU.

Above: Video trailer from the movie “From the Rough.” Sam served as the golf advisor for the film. 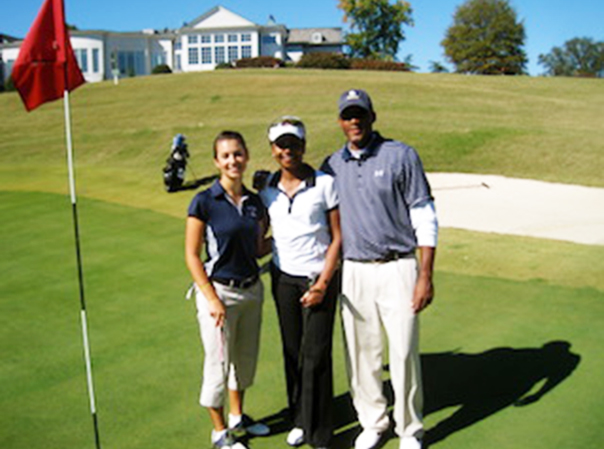 Sam Puryear: A Lifetime Focus on Maximizing the Potential of Young People
Samuel G. Puryear, Jr. was born in Winston-Salem, NC. He is a 1992 honors graduate receiving his bachelor’s degree in speech communication and theater from Tennessee State University in Nashville, Tenn.  During Puryear’s time as a collegiate golfer & team captain at Tennessee State University, he played under the leadership of Coach Dr. Catana Starks, the first woman to coach a men’s Division I golf team.

Currently, Puryear serves as the Director of Golf of the Howard University Golf Program in Washington, DC and serves as the president of PURYEARGOLF.COM and Pure Swing Golf Solutions, LLC. Puryear is a progressive entrepreneur with an in-depth knowledge of collegiate and professional golf. With more than 25 years in the golf industry, his specialties include junior golf development for collegiate placement, motivational speaking, mentoring students and coaching. He has extensive work in the non-profit industry specializing in fundraising, board development and organizational development. Puryear has worked extensively abroad with junior golfers and continues to work with golfers and their families in China, Taiwan, Dubai, Mexico and Uganda. He has helped to bring these players to the United States to play golf.

With more than a two-decade career in the game of golf, Puryear has contributed to maximizing potential in the young people that he has worked with and is an advocate for education & professional growth. He found a niche in developing golfers and mentoring new coaches, directing junior golf clinics and camps, adult golf instruction and private corporate outings. Puryear is also a recurring facilitator and coach for collegiate camps and Nike golf camps around the country.

COACHING CAREER
In his professional life, Puryear’s coaching career began at Stanford University. Puryear took part in a process that saw the Cardinal jump from a No. 42 team ranking all the way to No. 1, according to Golfweek, the Nike Coaches Poll and Golfstat. In 2006, Stanford finished sixth at the Pac-10 Championships and tied for 14th at the NCAA West Regionals. One year later, Puryear helped the Stanford program reach a different level. The Cardinal won a school record seven tournaments and earned a No. 1 seed in the 2007 West Regional. At the NCAA Championship, Stanford captured the national title with a 12-stroke victory in Williamsburg, Va. In just two years at Stanford, Puryear recruited several top-ranked freshman, including Joseph Bramlett (2007 U.S. China Cup Team and 2007 Second-Team All-American) and Steve Ziegler (2007 Junior World Team). He also placed a heavy emphasis on player development as Rob Grube earned second-team All-America honors in 2007, after being an honorable mention selection the prior two seasons. In total, five Stanford student-athletes earned All-America accolades in 2007. After Puryear’s departure, his recruiting efforts continued to shine as the Cardinal finished 2nd and 5th in the next two seasons.

In addition to team accomplishments, Puryear’s MSU teams registered nine individual tournament wins and recorded double digit top 5 finishes during his four-year tenure. Puryear also coached the only Spartan in school history to qualify and play in the Masters Tournament. The Spartans golfers excelled both on the course and in the classroom. Students received All-America status, All-Academic Big Ten honors, and the teams gaining All-Academic recognition by the Golf Coaches Association of America. This award is given to programs that maintain a minimum team grade point average of 3.0 or higher. Puryear’s tenure at MSU as a Head Coach marked the first by an African-American at a major Division I BCS program in the history of NCAA collegiate golf.

Due to family illness, Puryear left MSU and moved closer to home and became the Director of Golf at Queens University in Charlotte, NC. He managed the men and women’s intercollegiate golf teams. He also led the university’s Professional Golf Management Program (PGM).

In Puryear’s first year at Queens, he led the women’s golf team to their first conference championship in program history. The Royals then repeated as conference champs during the 2012-13 season. The pair of titles remained the only in the program on the women’s side until the 2015-16 season which culminated with four consecutive victories, including the South Atlantic Conference Championship title. The Royals also touted SAC Player of Year, Grace Glaze, during the 2015-16 season, and she would go on to graduate as the best women’s golfer in program history. Glaze was one of Puryear’s first recruit.

The men’s golf team saw great success under Puryear’s tutelage as well. The men captured the 2012-13 conference championship title to give Queens a sweep of both the men’s and women’s titles during the same season. Additionally, Queens advanced to the 2013-14 NCAA DII Men’s Golf Southeast Regional and completed the season ranked 23rd in the country. That same year, Puryear was awarded SAC Coach of the Year honors. The men’s team won at least one tournament during each of Puryear’s six seasons.

On April 9, 2020, Howard University Director of Athletics Kery Davis announced the hiring of Samuel G. Puryear, Jr., as the Director of Golf.
In 2019, the Howard University Bison Golf program made national headlines when it received a generous financial boost from six-time NBA All-Star and Eat. Learn. Play. Foundation co-founder, Stephen Curry, who committed to support the establishment of the university’s first NCAA Division I golf program for six years. Howard University aims to debut the first men’s and women’s golf teams in the 2020/2021 academic year, with resources strategically allocated for talent scouting and training to have a competitive Division I team in place for its inaugural season. The university previously had a Division II golf team and various intercollegiate and intramural club teams.
“Partnering with NBA Champion Stephen Curry to support Howard University’s first NCAA Division I golf program brings critical resources to the table to support our vision to enhance our athletics program and use sport to expand the cultural experience of our students,” said President Dr. Wayne A. I. Frederick. “The selection of Coach Sam Puryear is the next step in this historic journey to take golf at Howard to the highest level. His experience training student athletes to perform on the greens, in the classroom and on the PGA Tour will serve him well as he creates a foundation of excellence to pursue championship-level play in the Bison community.”
The relationship has paid immediate dividends. The Bison won the 2022 MEAC Championship and the 2022 PGA Works Minority National Championship. The Bison also have the top two rated African-American collegiate golfers in the country. Puryear was named the 2022 MEAC Outstanding Coach of the Year.

Samuel G. Puryear, Jr. has been a leader within the golf industry by touching lives and instilling dreams on the collegiate level and within the local community. Puryear’s started his career in the golf profession in 1998 as the Executive Director of the East lake Junior Golf Academy in Atlanta, Ga. From 1998-2006, he increased enrollment from 150 to 1,000 students. Understanding the importance of junior golf in a community, Puryear was a prominent spokesperson for the topic and directly impacted the revitalization of the East Lake community, which at one time was saturated with crime.

Puryear has raised more than $4M during his non-profit career.

He has extensive experience in developing boards and working with key leaders in sports, banking and finance, entertainment, the legal sector, the nonprofit arena, and faith-based organizations. These relationships have led to the recruitment of top-level volunteers and industry professionals.

Accolades and Achievements
Puryear’s accolades include being recognized by several media outlets as a prominent spokesperson discussing the future of minorities in golf. He has served on a golf panel on CNN. Puryear’s work with student-athletes has also been featured on ESPN, Inside the PGA TOUR, and the Disney Channel. His efforts contributed to a larger community revitalization in metropolitan Atlanta that was prominently featured in Fortune magazine, New York Times, USA Today, Wall Street Journal and Atlanta Journal-Constitution. Puryear was featured with two former golf students on the Disney Channel in a segment promoting kids to follow their dreams.

In 2007, the mayor of Winston-Salem, N.C., Puryear’s hometown, proclaimed June 11 “Samuel G. Puryear Jr. Day” because of his contribution to the game of golf and the local community.

Puryear also served as a consultant for the making of the movie “From the Rough,” starring Academy Award nominees Taraji P. Henson as Coach Starks, Tom Felton of “Harry Potter,” and Michael Clarke Duncan from “The Green Mile.”

Puryear has amassed a bevy of accomplishments, but his biggest joy and the thing that truly makes him smile are his three amazing children and his family.

In 1988, Sam Puryear started his career as a golf professional as Executive Director of the East Lake Junior Golf Academy in Atlanta, Georgia. Sam reached out to the local community and invited every kid to come learn a new sport: golf. From 1998-2006, Sam increased enrollment from 150 to 1,000 students. As the leader of the East Lake Junior Golf Academy Sam focused on more than just skills on the course: he focused on academics, nutrition, golf etiquette, what to wear and more. Sam’s enthusiasm, leadership ability and enthusiasm inspired young golfers and transformed a community. East Lake became the foundation for what is known now as the First Tee. To the left you can see a wonderful video promo that was filmed at East Lake.

Sam has provided excellent mental coaching for my son, Blake. He has taught him how to be “mindful in the moment” and to not let negative thoughts distract him from playing a great round of golf. Sam helps create a mindset of positivity in a sport that can sometimes be challenging. What also stands out is the follow up that Sam provides after a tournament. He’s always checking in to see what worked and what my son could have improved on.

I would recommend Sam to any player looking for a mental coach who is both knowledgeable, passionate and who can provide the tools necessary to help elevate your golf game.